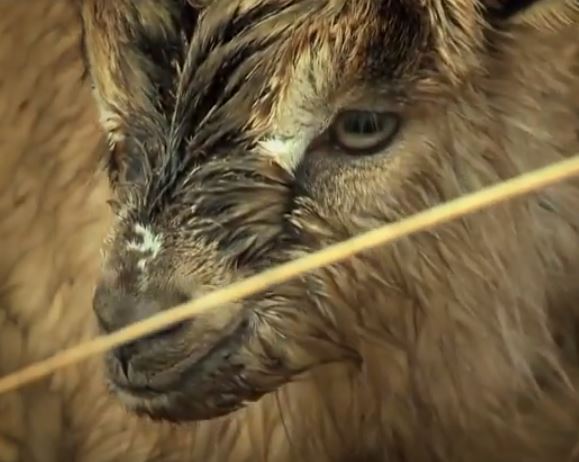 The small rural community of Mulranny, Co. Mayo has undertaken the mammoth task of attempting to bring the Old Irish Goat back from the brink of extinction.  A feral herd of goats has lived in the hills above the village for as long as the oldest members of the community can remember. The story started with an article in Heritage Outlook magazine written by Ray Werner, one of the foremost experts on European Goats.  Ray outlined his search for Ireland’s original native breed of goat and asked readers in Ireland to contact him if they knew of any herds of goats that could contain goats of the Old Irish type.  Ray‘s only reply came from Mulranny! He visited Mulranny and recognised that many of the Mulranny goats were of the Old Irish type.  Mulranny Goats DNA had to be compared against primitive goats from the early 1900’s, predating the importation of modern breeds, to prove that the Mulranny Goats were the rare Old Irish Goats.  A pioneering DNA study was carried out by the Smurfit Genetics Institute of Trinity College, Dublin.  This study used DNA from the Mulranny Goats, old taxidermy goat heads from Moran’s farm Mulranny, from Westport House, taxidermy goats found in the Natural History Museums of Ireland, England, Scotland and DNA samples from goats in England and Europe. The DNA study highlighted the endangered herd living in Mulranny as a unique population in need of protection. “Overall, these findings identify Mulranny goats as some of the last modern representatives of the ‘Old Irish’ type of goat, once ubiquitous throughout the island, and highlight them for much needed conservation efforts.(Cassidy, et al 2017). All of this work was led by a small volunteer group, in a small community in the west of Ireland, the Old Irish Goat Society.

The Old Irish Goat had been the subject of a chronic spiral of decline driven by changes in agricultural practices, cross breeding with modern
improved goats, casual hunting and indiscriminate culls of feral herds. All made worse by a lack of recognition, leading to a relentless
mongrelisation of the old type towards more nondescript individuals and a declining population on its way to extinction.

Uncontrolled cross breeding is considered one of the greatest threats to landrace breeds worldwide. Of the 19 goat breeds extinctions worldwide, 15 have occurred in Europe

That process has reached the final stages for the Old Irish Goat and to lose a distinct native Irish breed to a generalised mixture of goat, would be very sad to behold.

The Old Irish Goat Society Mulranny has honoured the Precautionary Principle of the Convention of Biological Diversity; “if there is threat of significant loss of biological diversity, lack of scientific certainty should not be used as a reason for postponing measures to avoid or minimise such a threat”. Doing so helped Ireland progress UN Sustainable Development Goal 15, which under biodiversity states: “Of the 8,300 animal breeds known, 8 per cent are extinct and 22 per cent at risk of extinction”

It supports progress on the Convention on Biological Diversity, Aichi Target 13: “By 2020, genetic diversity is maintained”.

UN FAO 2009 - Lest we forget: “Animal genetic resources are among the most valuable and strategically important assets a country possesses”

On the 22nd of May a public meeting of the Mulranny community unanimously agreed to conserve the Old Irish Goat.

The Old Irish Goat has been recognised as an historic and cultural icon of Mulranny and an emblem of our pastoral history.

You have to keep knocking on doors - eventually they will open.

Ask people who are interested in your project to help or join your group.

Which Sustainable Development Goals does your work link to?